A frosty Monday will start off the week across the country as a cold snap continues in the Western Cape, but it will warm along the northern belt of the country.

Extremely high fire danger conditions are expected over the North West province, except the north-east,  and the northern parts of the Free State.

Gale force north-westerly winds of 62-80km/h are expected between Table Bay and Cape Agulhas in the morning, becoming south-westerly and spreading to Plettenberg Bay in the evening, subsiding on Tuesday morning.

High seas, with wave heights between 6-9m, are expected between Cape Point and Cape Agulhas.

Localised flooding is expected over the Cape Metropole and Overberg areas in the Western Cape towards the evening.

Disruptive snowfall is expected over the high-lying grounds of Cape Winelands, central Karoo and Garden Route Districts as well as Karoo Hoogland in the Northern Cape.

High seas, with wave heights between 6-9m, is expected between Cape Columbine and Plettenberg Bay on Tuesday morning, subsiding west of Cape Agulhas from Tuesday afternoon.

Very cold conditions are expected over the Hantam and Karoo Hoogland in the Northern Cape, including the interior of the Western Cape.

Strong winds of 50-62km/h is expected over the Cape Metropole and Overberg areas in the afternoon into Tuesday morning.

The weather in your region:

Gauteng will have a fine and cool Monday, but it will start off with morning fog in the highveld.

It will be cloudy and cool, with isolated morning rain in the east of Mpumalanga, but warm in the Lowveld.

Morning fog patches are expected along the escarpment.

Limpopo will also have a cloudy and cool day, with isolated morning rain in the east, but warm in the western Bushveld.

Morning fog patches are expected along the escarpment.

The North West will have fine and cool to warm conditions.

The weather will be fine and cool in the Free State.

The Northern Cape will be fine and cool, but cold in the south.

It will become partly cloudy and cold to cool, but very cold over the southern interior, where it will become cloudy with evening rain and snowfalls overnight.

The wind along the coast will be strong southerly, becoming moderate south-westerly in the afternoon.

The Western Cape will be fine in the morning, becoming cloudy to partly cloudy and cool, but cold over the south-western parts with rain in the afternoon. It will spread to the north, central interior as well as the south coast in the evening.

Snowfalls are expected over the high-lying areas overnight.

The wind along the coast will be fresh to strong westerly to north-westerly, reaching gale force between Table Bay and Cape Agulhas in the late morning, becoming south-westerly and spreading to Plettenberg Bay in the evening.

Conditions over the western half of the Eastern Cape will be fine and cold, becoming cloudy with showers in the evening and overnight south of Darlington Dam.

The wind along the coast will be light northerly to north-easterly, becoming strong south-westerly in the evening.

The eastern half of the province will be fine and cold. The wind along the coast will be moderate to fresh north-easterly.

Morning fog patches are expected over the interior of KwaZulu-Natal in the morning, with rain forecast for the north-east. Otherwise, it will be cool but cold in places in the interior.

It will become fine by early evening.

The wind along the coast will be moderate southerly to south-westerly, becoming fresh to strong easterly to north-easterly by late morning, reaching near gale in places at times. 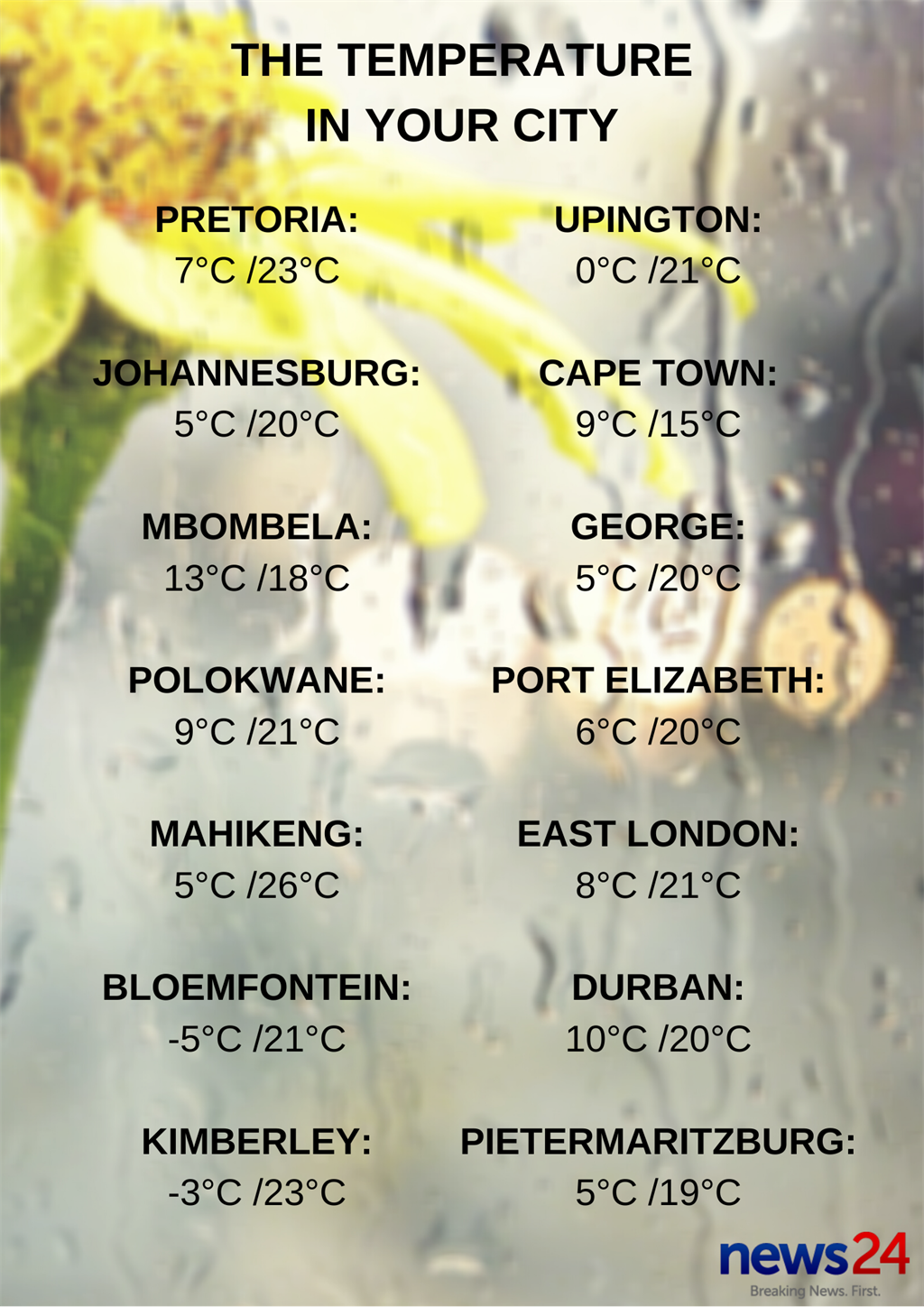