Shenseea and Jada Kingdom working on a new collaboration as they official squashed their beef on Instagram.

Shenseea and Jada Kingdom have not only squashed their two-year beef but have gone a step further with some social proof, so to speak. Both are now following each other on Instagram again, just weeks after Jada extended an olive branch to end their hostility in the wake of Shenseea’s mom’s passing. Their fan bases lauded the silent step, which sees them coming full circle to where the hate started when Shenseea allegedly publicly dissed a fan who turned out to be Jada’s cousin. And since both have essentially indicated to the internet that all is well again, fans wasted no time with their requests for a sizzling summer single.

Sources confirmed with Urban Islandz that the two dancehall divas recently chopped it up on the phone and even talked about doing a collaboration together. We’re told that Jada Kingdom was among the folks who sent Shenseea flowers and support after the sudden passing of her mother, and ShenYeng was very appreciative of the gesture. One of the things that they also spoke about is the misunderstanding that sparked their beef in the first place and how, as women in a traditionally male dominated genre, they want to uplift each other in dancehall.

Like Spice and Lisa Hyper did some weeks ago, the pair have reunited, agreeing to let bygones be bygones. The female emcee’s friendship deteriorated back in 2018 after a hairdresser hopped into Shenseea’s comments, seemingly trying to style her. “Come Shenseea come mek @dejahhairstylist do your hair,” the message said, which was read as a jab at her looks by the “Blessed” star. She sent a series of clap backs only to discover that the IG user was none other than Kingdom’s cousin after Twinkle intervened in heavy defense of her family. From there, the situation only deteriorated, and the rift has resulted in diss tracks, plenty of shade plus a potential brawl at last year’s Redbull Culture Clash.

But when Shenseea’s mom suddenly passed in June, a mature Jada was ready to make peace and was widely commended for offering condolences. “@Shenseea, I just got the sad news that your mother passed away. Regardless of our differences we’ve had over the years, today I’m standing up to respectfully send my condolences to you and your family. Your mother was your backbone & beyond. I can’t imagine the pain you must be going through right now and I know there are no words that can really help at a time like this but you made her so proud and will continue to do so! I know you’ll find the right amount of strength to pull through this terrible phase one day at a time. prayers up! RIP Mama Shen,” her IG message said. 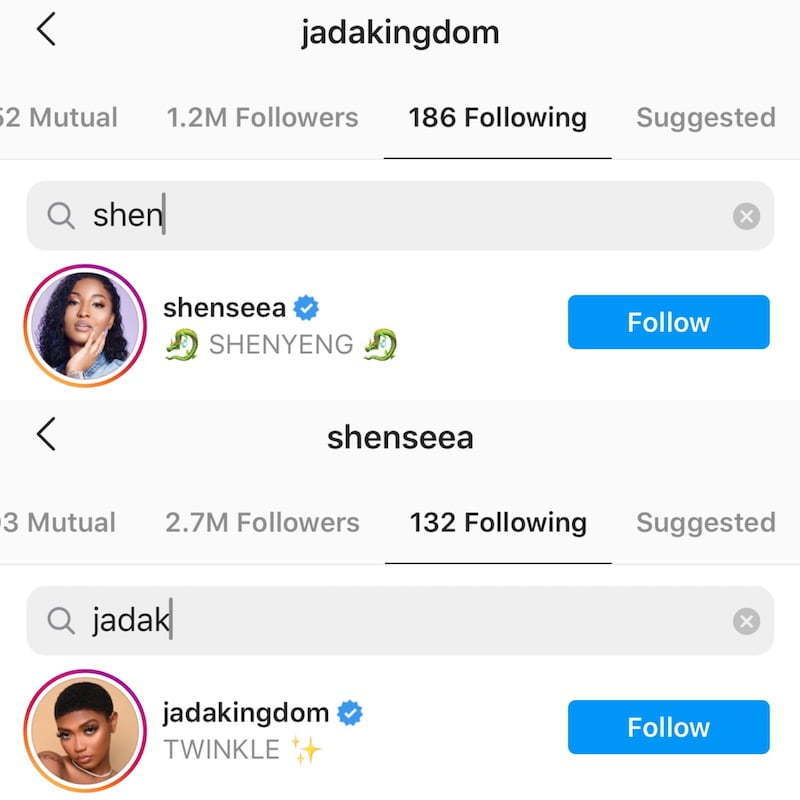 Fans wondering whether Shenseea would acknowledge the gesture are satisfied, and they now want the request for a joint track to be met. But that could be a while in the making, however, as both are busy enjoying the hard-fought fruits of their labor. Jada has just dethroned Koffee to take the #1 spot on trending with her uplifting anthem “Win,” a relatable certified fan favorite. Meanwhile, the ShenYeng boss is celebrating her latest video “Goof Comfort,” racking up 400K views in a day. Despite the backlash she received over the police attire and aesthetic in the visuals, she certainly won’t deny or take issue with the show of support.