Renan Hedouville, the Protector of the Citizen, congratulates the Superior Council of the Judiciary (CSPJ) for the speed with which it launched an investigation on 23 July 2019, around the circumstances of the suspicious release of Pastor Onold Petit, accused of rape on a minor of 14 years following the decision of Judge Jean Baptiste Louis Jean having sat on the second day of criminal assizes without jury assistance in the Jurisdiction of the Court of First Instance of Jérémie, on July 16th. A staggering decision while all the evidence in this case was indisputable and was ignored by the judge in their entirety.

The Office of the Protection of the Citizen (OPC) was informed by the CSPJ on July 30 that Judge Louis Jean was the subject of a layoff measure. This disciplinary sanction notified to the Magistrate is motivated on the basis of the overwhelming facts revealed in the handling of the criminal file for which he was in charge.

More details on the case : https://www.haitilibre.com/en/news-28272-haiti-flash-amazing-release-of-a-haitian-pastor-accused-of-rape.html

Renan Hédouville also notes that an appeal in cassation would have been exercised by the Prosecutor of Jérémie against the decision of the Judge on whom weighs suspicions of corruption.

While welcoming such a decision of the CSPJ in accordance with its powers of control and discipline, Hédouville took the opportunity to appeal to all the constituted authorities of the region to adopt the necessary measures to ensure the safety of its Departmental Director of the Grand’Anse, Me Arol Nicolas who is the subject of serious death threats because of his work to accompany victims of rape.

Haiti says soldier died of wounds after shootout with police

PORT-AU-PRINCE, Haiti – The Haitian Ministry of Defence said Monday that a soldier has died from wounds suffered during an exchange of gunfire with police officers protesting outside army headquarters.

The ministry said another soldier is in stable condition with a bullet wound.

Haitian police officers exchanged gunfire for hours Sunday with soldiers of the newly reconstituted army outside the national palace, in an escalation of protests over police pay and working conditions.

At least three men were taken to a hospital near the shooting with wounds to the legs and feet that did not appear to be life-threatening. Uniformed police officers told an AP journalist that the wounded men were fellow officers. The uniformed officers spoke on condition of anonymity because they were not authorized to speak to the press.

Police protests began this month after a half-dozen officers were fired over their attempt to unionize. The demonstrations are not directly linked to anti-corruption protests that roiled Haiti for most of last year, but they draw on the same widespread dissatisfaction with Haiti’s shrinking economy and President Jovenel Moise’s inability to improve the quality of life.

The Haitian army had been disbanded in 1995 after the fall of a dictatorship that used soldiers to repress domestic opponents. Moise reformed the army in 2017, promising that the military would patrol Haiti’s borders, assist in natural disasters and avoid domestic affairs.

“The Army High Command calls once more for the Haitian National Police to restore calm,“ the Defence Ministry statement said.

Get more of the Star in your inbox

Never miss the latest news from the Star. Sign up for our newsletters to get today’s top stories, your favourite columnists and lots more in your inbox 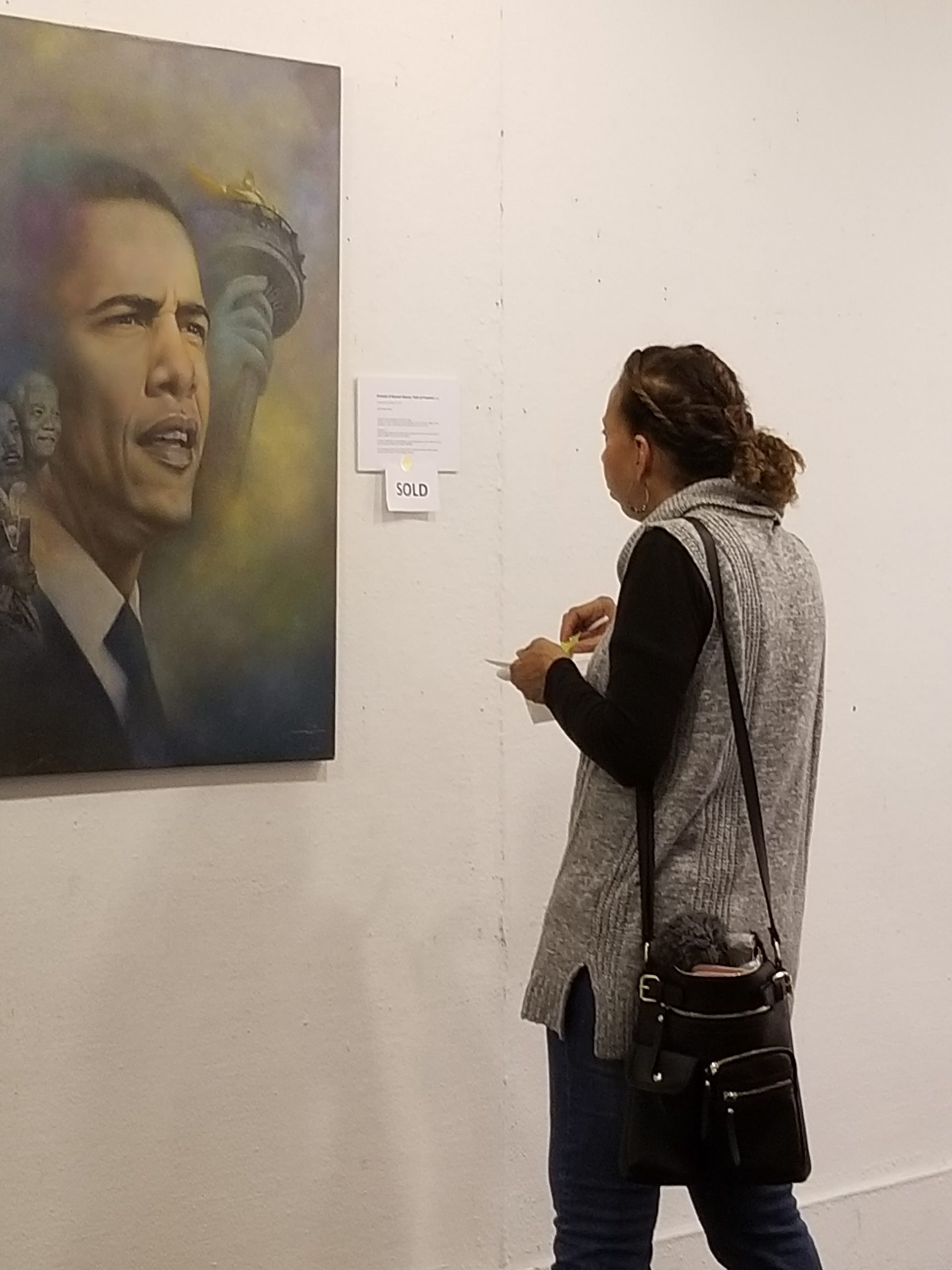 Richard Barbot was born in Haiti and has lived in Montreal since his childhood. He has displayed his work since 1984, including his first solo exhibit a year later. Recently, Barbot held an exhibit at the Manhattan headquarters of SEIU 1199 union. Barbot says that the human figure often represents the central element of his paining. “As I paint various characters, I try to create a visual atmosphere through which I can express my thoughts, my emotions or my social commitment. Barbot sat down with the Haitian Times for an interview.

The Haitian Times was founded in 1999 as a weekly English language newspaper based in Brooklyn, NY.The newspaper is widely regarded as the most authoritative voice for Haitian Diaspora.

Pointe-St-Charles Is Getting a New Haitian Restaurant, Cantine Burgz, Next Month

A new Haitan restaurant is setting up shop in a former hair salon in Pointe-Saint-Charles.

Cantine Burgz, which seats 10, is scheduled to open its doors at 1243 Charlevoix Street by the end of March. The casual eatery will serve hearty Haitian meals to diners on the go.

While Cantine Burgz is located in Pointe-Saint-Charles, the restaurant’s name is a reference to nearby Little Burgundy, the neighbourhood where owner Jackson Joseph grew up.

Vegetarian and vegans options will also be available. Expect dishes to fall in between $10 and $12.

“I want people to be able to afford the food because if you take a look at a lot of the restaurants opening up around here … eating out really adds up,” Joseph said.

Beyond filling the Haitian restaurant void in the area, Joseph aims to introduce a younger generation to Little Burgundy’s history through the restaurant’s decor.

The walls of Cantine Burgz will pay tribute to Rockhead’s Paradise, the former Montreal jazz club based in Little Burgundy, which established the city as the “Harlem of the North.” The venue featured prominent jazz musicians and singers from the 1930s to the 1950s, including Ella Fitzgerald, Oliver Jones, Oscar Peterson, and Billie Holliday.

Joseph is also dedicating a separate lounge room and preparing a directory for customers to peruse businesses supporting Montreal’s black community. While he won’t be cooking the meals himself, employees of Cantine Burgz all hail from the South-West.

“I want the restaurant to be as much a place for eating as well as a place for cultural exchange in the community and for discussions,” Joseph said. “Although Haitian cuisine is very meat-based, I want people who don’t eat meat or who don’t eat pork to still be able to enjoy a variation of traditional meals.”

Haiti – FLASH : The Carnival is canceled to avoid a bloodbath

The Government of the Republic observed, with concern and dismay, that terror reigned in certain arteries of the metropolitan area of ​​Port-au-Prince this Sunday, February 23, 2020 https://www.haitilibre.com/en/news-30102-haiti-flash-high-tension-at-champ-de-mars.html hhttps://www.haitilibre.com/en/news-30103-haiti-security-message-from-the-secretariat-of-the-high-command-of-fadh.html . Street obstructions and a war situation took place in the Champ de Mars area, where gunfire was heard most of the day. It is difficult at this time to take stock of this incredible violence.

The Government condemns with the utmost rigor these acts of violence and acts which violate freedom and democracy. The Government wonders who has an interest in adopting this extremist behavior aimed at driving the country into chaos, despite the commitments and decisions of the Executive Power to respond to the demands of the police officers ? Why reject dialogue and the outstretched hand to solve the difficult problems facing the homeland, choose the path of anarchy preferably and offer the population more pain and tears that such a situation will not fail to provoke ?

The people are called to be vigilant and to be intelligent in these troubled moments of national life. In any case, it can not allow a trivial exploitation of the demands of the PNH and justify these violent actions which expose the country as much, through an alleged rejection of carnival by a certain sector of the population.

In order to avoid the planned bloodshed, the Government takes the opportunity to inform, the population and the carnivalists in particular, that it has been decided to cancel the carnival in Port-au-Prince and invites the Haitian people to keep calm pending the next announcements.

Haiti – Security : Message from the Secretariat of the High Command of FADH

The Secretariat of the High Command of the Armed Forces of Haiti informs the general public that there is no confrontation between the police force and the army, as reported in the situation of confusion that reigned in Champ-de-Mars this afternoon when at first glance protesting police officers would have faced the FADH https://www.haitilibre.com/en/news-30102-haiti-flash-high-tension-at-champ-de-mars.html , however it specifies that “hooded individuals with firearms attacked the Grand Headquarters and tried to set it on fire.”

The soldiers on guard, whose one of whom was hit by a projectile in the back, had to shoot into the air to have them evacuated.

The Armed Forces High Command called on the police, responsible for maintaining order, to guarantee the safety and protection of the entire population.