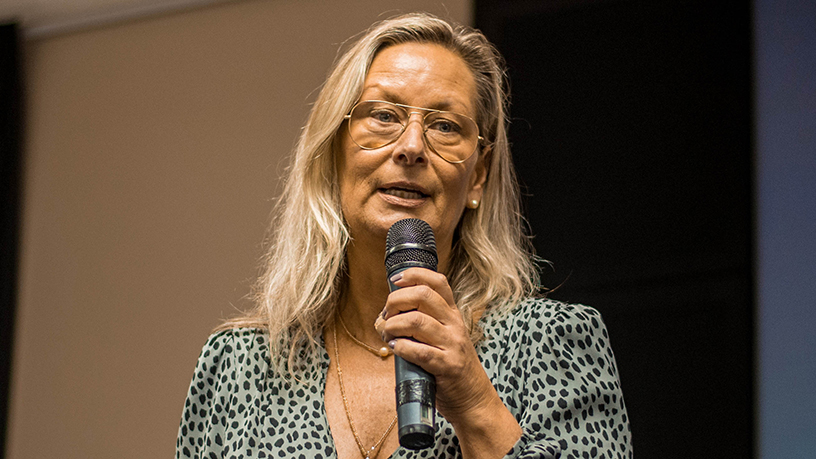 Birgitta Cederstrom, VP of commercial brand and demand for MEA MD B Incorporate, at Frost & Sullivan.

Birgitta Cederstrom, VP of commercial brand and demand for MEA MD B Incorporate, at Frost & Sullivan, opened her presentation at the first Moving to Mastery Women in Tech and Digital Conference in Cape Town yesterday with a slide that is four years old.

Featuring pictures of fitness trackers, self-service kiosks and drones, she explained that these innovations were seen as “futuristic” when she first created the slide but this is definitely not the case today.

“Technology is changing so quickly and what we need to do is embrace it.”

As women, it’s important that we get involved and understand its impact; these innovations are changing our entire lives and women can no longer afford to take a backseat when it comes to participating in all of the opportunities that tech has to offer, she continued.

Discussing the findings of a recent study by Frost & Sullivan based on interviews with a large group of C-level executives across the globe, Cederstrom noted artificial intelligence (AI), the Internet of things, blockchain and 5G are some of the most prolific next-wave disruptors.

All of these innovations will reduce costs, up productivity, improve the customer experience and accelerate decision-making, among other things.

Having outlined some of the particulars of different tech buzzwords, a panel discussion at the event showcased a few examples of these innovative technologies in action.

For Genevieve Mannel, head of IT at Cipla, when it comes to how much AI we are seeing in our lives, there are loads of examples. If you have interacted with a chatbot on a Web site recently, you are dealing with AI that mimics human behaviour to answer questions, she noted.

She experienced a more advanced example of AI to do visual recognition for the Foschini Group. This technology allowed customers to select a particular image of their favourite celeb and then use the AI tool to match his/her outfit to clothes that resembled what he or she was wearing but that could be found locally.

Machine learning lowers the cost and increased the efficiency of reaching areas and populations that were hard to access in the past, noted Celina Lee, co-founder and CEO of Zindi Africa.

In rural Uganda, health outreach workers used machine learning to detect and treat skin lesions caused by Buruli ulcers. The machine learning algorithm was trained to analyse photographs of these lesions and recognise which were dangerous, she continued.

“The tangible demand for these technologies generally falls into the for-profit market, making the lives of those with the means and the access, easier. But we have to make a conscious effort to apply these innovations in such a way that they have an impact for all.”

These innovations allow regular businesses to eliminate the mundane, manual and nonsensical tasks and enable them to focus on the customer experience. “Instead of trying to be smart with technology, use the technology to become more efficient and then use your people to do the thing that computers will never be able to do,” said Mannel. But we’re not replacing people. A complementary relationship is needed. “All decisions must be made with human beings. We’re not taking away jobs. We’re actually making people more efficient and giving them new skills.”

A company like Kodak went out of business because it did not listen to its market, Cederstrom concluded. “Things are happening so quickly now. You need to stay ahead of your game to stay in the game.”