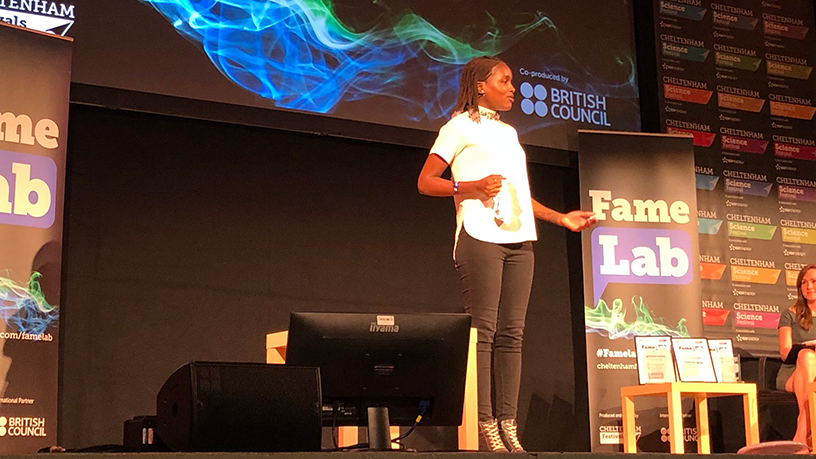 FameLab is a global competition aimed at finding and supporting the world’s most talented new science, technology, engineering and maths communicators.

Researchers from around the globe gathered in Cheltenham, UK, last week to compete for the title of the most innovative researcher.

Moropa made it through the preliminary rounds and took the runner-up title for her project, Water Remediation, which uses nano-technology to eradicate water pollution caused by the mining industry.

Moropa, who was named 2019 winner of the South African leg of FameLab earlier this year, is an analytical chemist doing her BTech degree in Polymer Technology at the Tshwane University of Technology.

The idea for her project was conceptualised while working as an intern for the Council for Scientific and Industrial Research, after participating in a 2018 workshop facilitated by FameLab partners, the South African Agency for Science and Technology Advancement and Jive Media Africa.

“Water Remediation aims to remove the heavy metals polluting water, as a result of mining and industrial activities,” explains Moropa.

“I used polymer nano-composites, to ‘attract’ waste materials and remove specific heavy metals, which are pollutants from mining and industrial activities. An idea such as this one is very significant for South Africa, where mining is the biggest economic contributor, yet it is also one of the biggest environmental contaminators.”

Acid mine drainage (AMD), a by-product of the mining process, causes acidic water to seep into clean-water systems such as rivers and underground sources. This contaminated water degrades the quality of all the water with which it comes into contact.

“There is not much known about the effects AMD has on human health; however, there are still concerns about its long-term effects. AMD water can contain heavy metals such as lead and mercury. Contact with these is known to cause conditions including kidney damage, neurological conditions, skin irritations and even cancer,” notes Moropa.

When asked what’s next for her, Moropa says it is not being a scientist; at least not in the way we understand scientists. “I want to be a scientist that talks about science to the community. There aren’t a lot of those in South Africa. We can’t groom competent future scientists if we have no one talking to them; I think I’ve found my calling! I want to talk to people about science for the rest of my life.”

The FameLab 2019 overall winner was Tim Gordon, a marine biologist and the first UK winner of the competition since its inception in 2005.

Gordon is studying the impact of climate change on coral reefs. In an age of unprecedented environmental destruction, he hopes to find ways of protecting the beauty and value of ocean ecosystems.

Athira Menon was also a runner-up in the competition. Menon is an astrophysics researcher in the Netherlands where she studies the “lives of massive stars and their dramatic deaths as supernovae or black holes”.