Set in the streets of San Francisco, Netflix’s new original film “Always Be My Maybe” is a love letter to the city, and while it’s not a mold-breaking romantic comedy, Ali Wong and Randall Park show Hollywood that Asian Americans don’t fit into any tiny box.

Wong and Park brought their own experiences into the film and made an authentic love story between childhood friends Sasha and Marcus who grew up next door to each other in San Francisco, riding cable cars and fishing by the piers. The writers and actors say they just wanted to tell a heartfelt story about the characters’ reunion 15 years later when Sasha became a successful celebrity chef and Marcus still lives at home with his dad, playing in the same band.

“When I watch the movie again, I do see San Francisco in a way that I feel like I have not seen in film before. You know you never see the Richmond District or the Sunset District which is such a big part of my childhood,” said Wong, who grew up in Pacific Heights.

The film checks a lot of boxes on the “things you don’t ever get to see in Hollywood” list. Asian Americans rarely get to lead a blockbuster film, let alone be the lead in a romantic comedy where they find each other attractive. They are often portrayed in two extremes, either innocent or evil, but the characters in “Always Be My Maybe” are your neighbors, your co-workers and the people you went to school with.

“It was never a question of ‘should this be an Asian American story?’ it was always going be that. The question is: How do we make it entertaining? How do we make it universal? How do we make it feel like you understand and relate to these people in their journey and have it be satisfying?” said director Nahnatchka Khan, who has worked as a producer and writer with both Wong and Park on ABC’s “Fresh Off The Boat.” 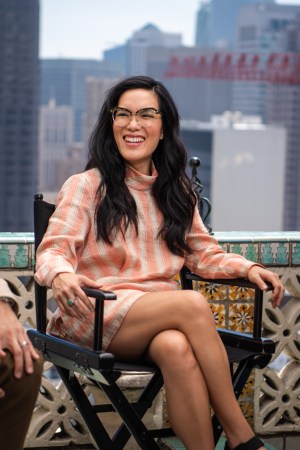 School friends Sasha and Marcus were close. She would come over to his house when her parents were busy working and Marcus’ mom would teach her how to make delicious Korean cuisine. In Asian cultures, like many others, food equals love. Wong, Park and film director Nahnatchka Khan named Turtle Tower and R&G Lounge, where Wong had her wedding banquet, as some of their favorite places in San Francisco.

Sitting on a balcony at the Fairmont Hotel with the Transamerica Pyramid behind her, Wong lamented how much the city has changed over the years.

“I just feel like every time I come home another business has been forced out, and the Punch Line really got to me because it’s such a special place to me that I came through. I’m hoping something can be done to save it because I don’t know where else comics are really going to develop and get their voice in San Francisco,” she said.

After her rise to fame in 2016 for the “Baby Cobra” comedy special, Wong said in an interview with New Yorker magazine that she wanted to do a movie like “When Harry Met Sally” but with her in it. Agents got wind of her wish and that’s when Park came into the picture.

The two attended UCLA together where Park was in a hip-hop group while he pursued a career in acting. Wong says Marcus’ character was largely inspired by Asian men she knew, and Park’s actual musical talent helped sell the act.

“I think that all of those other elements kind of just found their way into the script because it’s part of who we are,” Park said. 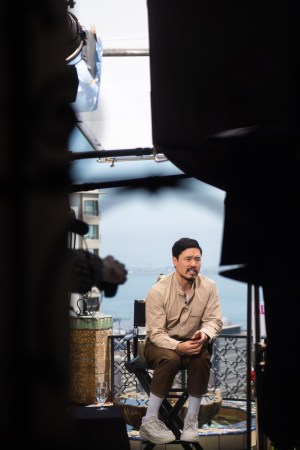 Park wrote the lyrics he performed in the film and even got the help of Bay Area rapper like Lyrics Born, who portrays Marcus’ band mate, and Dan the Automator.

After Marcus’ mom dies in an accident, teenage angst, grief, a D’Angelo song and an awkward car sex moment somehow drives Marcus and Sasha apart. It should be noted that Marcus was wearing a t-shirt from the iconic record store Amoeba Music when he lost his virginity in the car.

More than a decade after Sasha took her love of food to New York City, she was coming back to San Francisco to open a restaurant, when in a classic rom-com fashion, her best friend Vanessa (played by comedian Michelle Buteau) helped Sasha reunite with Marcus by hiring him and his dad to set up the A/C system in Sasha’s new rental.

Sparks didn’t immediately fly when they met again. They must work through their own insecurities and issues like adults do.

Park says a character like Marcus, a young Asian American, a musician, a loyal son who smokes weed in his room and invites his dad (portrayed by James Saito) to dance with him, exists all over the city.

Randall Park is “a strong Asian American sexy male” in #AlwaysBeMyMaybe. @RHandaNBC sits down with the writers/actors and director of the new Netflix film set in San Francisco: https://t.co/X0v0ml0B5Mpic.twitter.com/zgtUy8KAJi

The film “subtlety subverts” the norm, as Khan says, by portraying these characters just as regular people. It’s things some people may not think about, such as Marcus’ dad having an American accent. It’s eating chicken feet in a dim sum restaurant with mean Chinese waiters. It’s Marcus’ dad dating a Diana Ross impersonator.

Park said that they weren’t thinking about the cultural impact that the film could have. “Always Be My Maybe” wouldn’t be a good film if Wong and Park weren’t just being themselves.

“[Wong and Park] aren’t trying to chase any version of who they feel like they should be. I think people respond to that honesty and that like Ali is just being Ali Randall’s being Randall,” Khan said.

“Always Be My Maybe” is out on Netflix on Friday.

Robert Handa contributed to this report.