At only 33, Nipsey Hussle had already built the foundations of a legacy in South Los Angeles. Beloved for his music and his generosity, the hip-hop artist invested in his hometown and used his fame to promote education and community projects.

His accomplishments will be remembered Thursday morning, and what he could have done will weigh heavily on the minds of mourners when they pack Los Angeles’ Staples Center for an emotional memorial.

The memorial is scheduled to begin at 10 a.m. No details were given about who may be appearing, performing or speaking. It will be followed by a procession in South Los Angeles. Free tickets for the memorial were scooped up in less than an hour Tuesday.

Hussle, a father of two whose real name is Ermias Ashgedom, was shot and killed March 31 outside his Marathon clothing store in Los Angeles’ Hyde Park area. A man was arrested two days later and charged with murder.

The shooting touched off days of reflection and tributes, including many from fans, politicians, community leaders, athletes and celebrities. Candles, notes, flowers and other items were left outside his store. When some of those items were trampled during a chaotic night, volunteers replaced them so mourners would still have a place to honor the man who had mixtapes titled “Slauson Boy” and “Crenshaw,” nods to the community he loved.

Marathon is at the intersection of Crenshaw Boulevard and Slauson Avenue, about 10 miles southwest of downtown Los Angeles. Los Angeles’ city council is considering a motion to rename the location “Nipsey Hussle Square.” Before his death, Hussle was planning to meet with members of the LAPD about combating gang violence.

He spoke about his association with the Rollin 60s Neighborhood Crips in a 2010 interview with Complex.

Hussle had success in hip-hop’s inner circles for a decade through his coveted mixtapes. “Crenshaw” sold 1,000 copies at $100 apiece in an unconventional and independent pop-up sale in Los Angeles. He broke big last year with his major-label debut album, “Victory Lap,” which was nominated for a Grammy. Sales and streams of Hussle’s music have surged since his death, with thousands of copies of his albums bought during the week of his shooting, according to Nielsen Music.

His songs include references to his entrepreneurship and a vision for the neighborhoods where he grew up, including the Crenshaw District. Hussle and a business partner bought the plaza in which Marathon is located with plans to revitalize the area with a residential-commercial development, according to a Forbes report.

“I just want to give back in an effective way,” he told the Los Angeles Times in 2018. “I remember being young and really having the best intentions and not being met on my efforts. You’re, like, ‘I’m going to really lock into my goals and my passion and my talents’ but you see no industry support. You see no structures or infrastructure built and you get a little frustrated.”

Thursday’s procession is expected to pass the store and other parts of South Los Angeles.

More recently, Hussle participated in community development efforts and was part of the team behind Destination Crenshaw, an open-air museum honoring African-American achievement. He also invested in Vector 90, a program in South LA for young people interested in science, technology and mathematics. Hussle called it a bridge between Silicon Valley and the inner city.

Imani Beal-Ampah, a longtime Crenshaw District resident, told NBC News that she remembers the genuine enthusiasm around the release of his earliest songs in 2009. She’s also seen his impact in South Los Angeles neighborhoods.

“He became a neighborhood hero; he was such a positive figure in our community,” Beal-Ampah, 29, said. “You see the changes that he made. He worked with elementary schools and helped to bring STEM programs in the community. This is not just someone who just had a business. He wanted to change the community from the root up.”

Hussle is survived by his longtime girlfriend, actress and model Lauren London, with whom he had a son, Kross, and by a daughter, Emani, from a previous relationship.

The man charged with killing Hussle has pleaded not guilty. Eric Holder entered the plea during his first court appearance in Los Angeles Thursday. The 29-year-old has been charged with murder and two attempted murder charges over the attack that killed Hussle and wounded two other men. 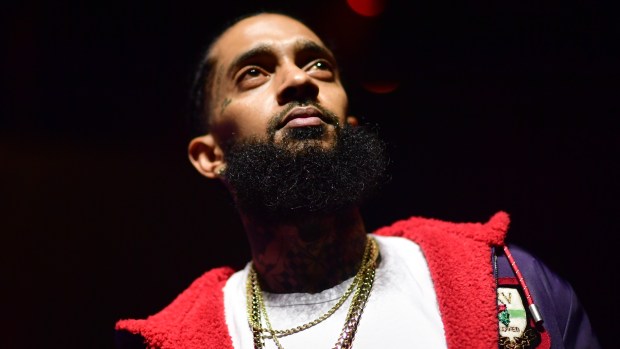 Holder was ordered held in lieu of $5 million bail. If convicted, Holder faces life in prison.

Holder and Hussle, who knew each other, had several conversations Sunday outside Hussle’s The Marathon store, police said. They said Holder eventually returned with a handgun and shot Hussle and wounded two other men before fleeing.