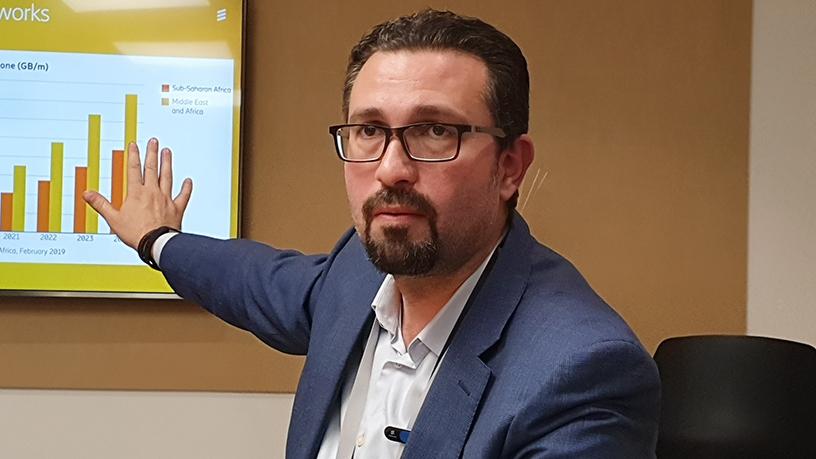 Ericsson predicts Middle East and Africa (MEA) will have around 30 million 5G subscriptions by the end of 2024, representing just 2% of total mobile subscriptions.

This will make 5G the fastest generation of cellular technology to be rolled out on a global scale, according to Ericsson’s MEA-specific Mobility Report released at Mobile World Congress (MWC) 2019 in Barcelona, this week.

Ericsson did not have a specific prediction for 5G subscribers in Sub-Saharan Africa over the next five years, but the number will likely be well below 30 million when the Middle East is removed from the equation.

It says key drivers for 5G deployment include increased network capacity, lower cost per gigabyte (GB) and new use case requirements. The majority of 5G subscriptions in MEA are expected to come from advanced ICT markets like Saudi Arabia, UAE and Qatar, while in Africa, considerable momentum is building up in SA.

From a mobile data traffic point of view, the region is globally the highest, with nine times growth forecast between 2018 and 2024, and mobile broadband subscriptions are due to double from 860 million by 2024.

The MEA region covers over 70 countries, a population of 1.6 billion people and over 200 telecoms operators.

The report predicts total mobile subscriptions in Sub-Saharan Africa will grow from around 710 million in 2018, to about 940 million in 2024. Average mobile subscription growth globally is 3% per year but in Sub-Saharan Africa it is 5%, according to Ammar Ammar, head of networks campaigns at Ericsson MEA, who presented the report to journalists at MWC. 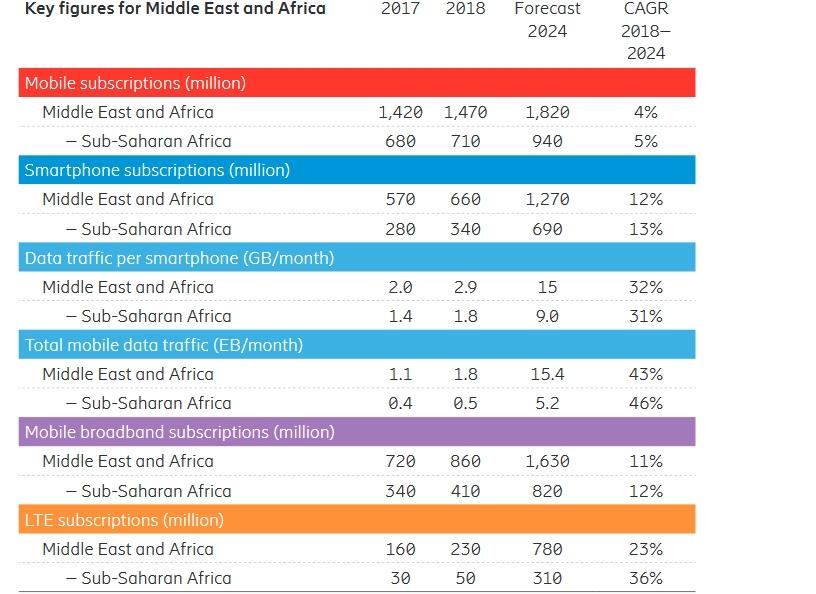 Data traffic per smartphone is predicted to grow in Sub-Saharan Africa from 1.8GB per month in 2018, to 9GB per month in 2024, which is compound annual growth rate (CAGR) of 31%. This will be due to increasing usage of mobile video applications on higher resolution screens and better network throughputs leading to more data traffic.

For MEA, combined data traffic per smartphone is expected to grow from around 2.9GB per month in 2018, to 15GB per month in five years, a CAGR of 32%.

Economies in the Middle East and North Africa showed signs of recovery in 2018, according to Ericsson, and are expected to grow by 3.9% in 2019 as oil exporters benefit from the improved outlook for oil prices.

In Sub-Saharan Africa, gross domestic product growth is expected to show a similar upward trend, supported by rising commodity prices and improvement of the investment environment in large economies such as Nigeria and SA.

“Continued economic growth in the region, coupled with a young population, favourable policies and lower cost devices, will drive investment in the telecoms sector, increasing uptake of ICT services.”

The report predicts the first commercial 5G deployments are expected by early 2019, with significant volumes in 2021.

This week at MWC, South African network, Rain, announced it has launched the first 5G commercial network in SA, in partnership with Huawei and Nokia.

The MEA region’s telecom market is characterised by increasing uptake of LTE and high usage of apps. Therefore, significant growth is expected in data consumption and mobile broadband subscriptions.

LTE subscriptions in the region will have the highest growth at 23% CAGR between 2018 and 2022, driven by increased mobile communications service provider investment in 4G networks, as well as rising usage of data-intensive mobile services in the region. For Sub-Saharan Africa, the CAGR will be 36% for LTE, as users are predicted to grow from 50 million in 2018 to 310 million in 2024.

However, the report predicts the majority of subscriptions in MEA will still be WCDMA/HSPA (3G) and LTE (4G) in 2024.

At the end of 2018, WCDMA/HSPA connections represented almost half of all subscriptions in MEA, rising only slightly until 2024. On the other hand, GSM/EDGE (2G) subscriptions are expected to decrease significantly from 41% of the total subscriptions in 2018 to 10% in 2024.

Ammar says operators need to start phasing out 2G by ‘sunsetting’ one of their GSM bands and migrating the spectrum to be used for LTE.

Ericsson predicts the first wave of 5G in MEA will target the fixed wireless access segment, where operators utilise it as an alternative to fibre, with quick time to market, as well as being an additional revenue stream.

However, for full 5G potential, large-scale rollout and long-term success, two main areas need to be addressed: spectrum availability and use case development, the report said.

“As 5G now hits the market, its coverage build-out and uptake in subscriptions are expected to be faster than for previous generations. At the same time, cellular Internet of things continues to grow strongly. As networks mature and ecosystems evolve, service providers need to become increasingly agile to achieve the goal of profitable growth,” Rafiah Ibrahim, head of Ericsson MEA, told journalists at MWC.