Soulja Boy is using his beef with Tyga and Blac Chyna to promote his new music.

Soulja Boy is back to his usual antics on Twitter, but this time he has some new music to promote and all off us fell for his tactics. It’s safe to say that Big Draco is either social media marketing genius or just a rapper who loves controversy. Either way, his tactics are working in his favor because he is selling more music and merchandise while embroiled in his usual social media shenanigan.

We witness 50 Cent doing it week in, week out, where he picks one of his favorite celebrities to troll on Instagram all while promoting his ventures. Soulja Boy went on Twitter on Monday to troll Tyga over his mishap from last weekend where he was dragged out of Floyd Mayweather’s birthday bash in Los Angeles after getting into a fight. Draco sent out some tweets that he later deleted and for good reasons. Some of them may have gone too far when he involved Tyga’s son with Blac Chyna in it.

“I f***ed yo baby mama and played Fortnite with yo son,” the SODMG rapper tweeted before adding, “Me and Blac Chyna could neva work she like n***az like Tyga.” 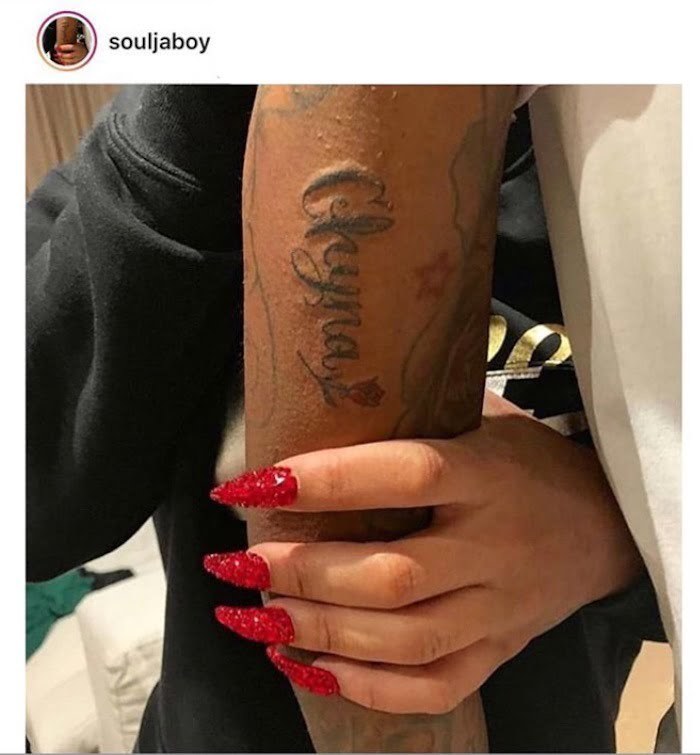 Soulja Boy appears to be feeling really salty about his breakup with Blac Chyna after reports surfaced that she dumped him. The celebrity socialite even took a few shots of her own when she called the rapper immature.

Even after Soulja Boy deleted most of the offensive tweets, he left one up of a photo of Tyga getting dragged out of Floyd Mayweather’s 42nd birthday bash on Saturday night. Soulja also posted an deleted a picture of a Blac Chyna tattoo on his arm. It’s unclear what was his true intentions since that wouldn’t be something he is proud of getting after their bitter split.

As for his new music, Soulja Boy released a new song on Monday. “Ball Like I’m Kobe” is the title of the track and it features Smooky Margielaa.