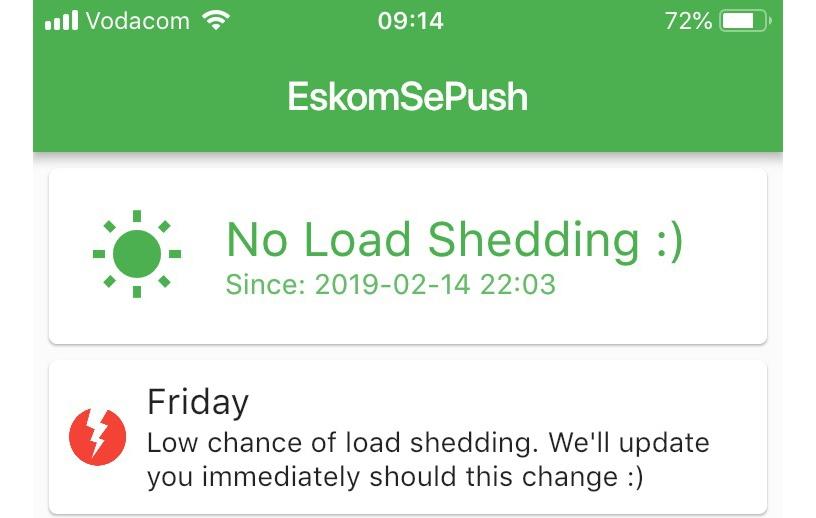 The founders of Eskom SePush, a mobile app that provides push notifications for load-shedding schedules, plan to expand the service offering after the app grew from 2 500 users to 515 000 this week.

Eskom SePush was developed by software developers, Dan Wells and Herman Maritz, as a side-project in 2014. It provides users with updates on load-shedding schedules in over 3 000 suburbs across SA.

Since inception, the app, registered under their company Wellwellwell, experienced high peak user volumes during load-shedding periods in 2015 and again at the end of 2018. However, this was nowhere close to the number of active users it gained this week.

The app garnered 919 000 downloads, making it the most downloaded South African application on the iOS store, and the second most downloaded app on the Google app store, behind only WhatsApp.

The app saw a surge in users after SA was plunged into darkness this week, when Eskom escalated its load-shedding schedule from stage two during the weekend, to stage four on Monday, after the state-owned power utility “lost functionality” in six of its generating units.

This morning, Eskom told Eye Witness News that there is low probability of load-shedding today, after stage two load-shedding was terminated last night.

The co-founders are working hard to ensure users remain engaged beyond the load-shedding phase, if Eskom’s promise to subside load-shedding by March is fulfilled.

“We’re thinking of adding two additional services on the app. Firstly, we want to open up the platform to allow conversations to take place between users from the same areas, who need information about what’s happening within their area. We also want to provide municipal announcements on services such as water shortages and electricity faults in specific areas and more,” says Wells.

“At the moment, we are receiving a high volume of e-mails where users are enquiring about things like why is the load-shedding taking longer than expected in their area, or why is there a power outage in their area although load-shedding is not scheduled. So it’s clear better communication is required.”

In addition to the extra service, the co-founders plan to extend the service to Botswana.

In 2017, Eskom and Botswana Power signed a new power supply agreement in line with Eskom’s plan to increase its electricity exports to SA’s neighbouring states.

“We are currently engaging citizens in Botswana, to gauge interest and see if this is something that would be useful in the country. They also experience power supply issues from time to time. However, nothing has been implemented as yet.”

The free app allows users to log in and search for their location to view a schedule detailing load-shedding dates and times in their area. The user has an option to receive constant updates via the app’s push notification service called PushBullet.

Herman and Wells work on the back- and front-end of the app, which is based on a Python application programming interface. They chose to host the app on Cloud Africa, ensuring they support a local service provider.

“We spend a good couple of hours capturing and storing load-shedding data on the app daily. Around 60% of it is captured manually and 40% is captured automatically from public sources such as the different municipality Web sites and the Eskom Web site. Users have also been instrumental in informing us if we have the incorrect information, or if it requires updating. We are planning on getting a third person to assist us soon.”

While Wells insists financial gains are not a priority at the moment; the app uses Google ads, where advertisers pay Google to display brief advertisements across the platform. Google then pays Eskom SePush for the number of ads displayed on the app, helping it to take care of hosting costs.

“Although we really don’t like adverts in mobile applications, with the sudden high surge in users, our servers need to be regularly upgraded, so it’s helping to run the business. We are also engaging potential partners and local advertisers like battery manufacturers, geyser and solar power companies who are interested in placing targeted apps on our platform,” concludes Wells.