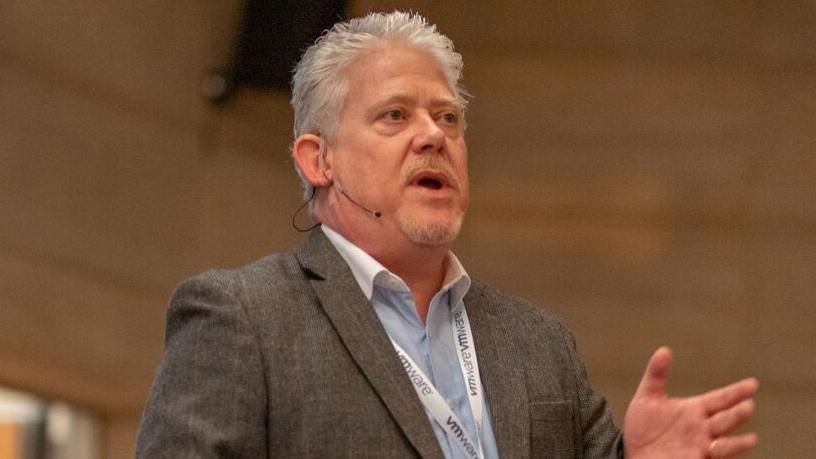 We live in exponential times.

“Everything is growing. The world’s largest cities, the average global temperature, the world’s population and survival rates, and of course, the volume of data.”

Markets are changing faster than ever, and people are being rolled into new businesses quicker than ever, he continued. Competition is more intense, and is coming from new spaces. Businesses you never considered to be competition a few years ago, are now fighting for a slice of your market share.

Moreover, the way we work has changed.

“Work isn’t a place we go to any longer, it’s something that we do”, says Doo. “Mobility has changed the way we work forever.”

With the Internet of things, there were 11 billion connected devices last year. “Soon, your fridge will wake you up, your toaster will make you coffee and your TV will be sending spam.”

“Some $12 billion was spent on artificial intelligence and machine learning in 2017, set to quadruple by 2021, although we are so low on that growth curve at the moment, it’s very hard to put any numbers against it.”

And all of this is going to need more security, he says.

Software is eating the world

Partner ecosystems are also in flux, with vendors getting acquired by other vendors.

“Software is eating the world. If we look back to 1955 through to 2017, out of the top global 500 organisations, there are only 50 left. Only one in ten has survived, the others have failed, or been acquired. That attrition rate is scary.

“Every single business we talk to is becoming a technology company. From 2010 to 201, everything has changed, there is not one ‘pure-play’ company left. No business in only a software or hardware business.”

“So, businesses need to ask themselves, how much of a tech company they want to be in terms of what they build and have in-house, and where they want to partner.”

And customer expectations have never been higher. People are buying insurance, cars and houses based upon digital experiences that they are enjoying. “If you’re not on that journey already, in terms of how you embrace your customer relationships better, then it’s going to be a heavy slog for you to catch up with the companies that are already engaging in that space.”

Doo says all he visionary companies have realised that delivering a truly digital experience requires working across organisational boundaries of contractors, business partners, people you sell to and sell through, and of course employees.

This shift to a digital world is bringing new threats from a cyber security perspective. When most of your information actually belongs to other people, a breach can have catastrophic consequences.

“We can expect more targeted attacks. Today, your weaknesses are known, and threat actors may target your supply chain or third party, or even the person who cleans your office.” And with regulations such as POPI and GDPR, the risk of reputational and financial damage is very real, he warns.

As always, people remain the weakest link in the chain – people’s actions, whether deliberate or not, are the cause of a vast number of security incidents, he says.

“Another thing I can say with no fear, is that people are the new perimeter. Security has become about building protection around who the individual is. Are they coming in from a device we are used to? Or an IP range we are accustomed to accessing our organisation? Or even a geo-location we are used to?”

The way we work has changed. Work isn’t a place we go to any longer, it’s something that we do.

The new application reality, he says, is that all the new, innovative technology is being launched on the cloud and identity is going to be crucial in any organisation’s journey to the cloud.

“Yesterday, all identities were internal, but today we have a hybrid environment and identity is now an independent and neutral platform. Your users don’t want multiple user names and passwords. They want one identity that allows them to access the tools they need whether cloud-based, or on-premises.”

Tomorrow, identity will have a universal standard. “This will affect everyone. It will be huge. We are all equal before a wave,” he concluded.