Unlike the Academy Awards, which is set to hold this year’s ceremony without a host for only the second time in its history, the Grammy Awards have done without a dedicated emcee on 16 past occasions.

Taking the hosting reins at the Grammys—in contrast to what has seemingly become a thankless gig hosting the Oscars following Kevin Hart stepping down and no replacement being named—is 15-time Grammy winner Alicia Keys. “I know what it feels like to be on that stage, and I’m going to bring that vibe and energy,” Keys said in a statement Tuesday.

Of the two ceremonies the Grammys is perhaps best suited to go without a host. More freewheeling than the Oscars but not as shock-worthy as the MTV Video Music Awards, the Grammys are as much about the performances as the winners. Notable performers deliver their biggest hits­—many of which are nominated—to a worldwide audience eager to see such songs showcased in a live environment.

Yes, the Oscars also has performances, but only a handful. The usually obscure songs nominated in the original song category are hardly a big audience draw. And though Lady Gaga and Bradley Cooper are set to perform the nominated song “Shallow” from “A Star Is Born” during the Feb. 22 Oscar telecast, such star power pales in comparison to Sunday’s Grammy lineup which will features performances by Diana Ross, Post Malone, Shawn Mendes, Dua Lipa, Kacey Musgraves, Miley Cyrus, Little Big Town, Ricky Martin, Yolanda Adams, Young Thug, Janelle Monae, Red Hot Chilli Peppers and Lady Gaga, among others.

In the lead up to Sunday, Keys has already shown she understands the importance of having fun in the host role. Something the Academy Awards should note is a huge audience pleaser, like the time DeGeneres descended into the audience and created perhaps the most famous selfie of all time.

In an almost 10-minute announcement video uploaded to YouTube three weeks ago, Keys let fans come along for the ride as she discovered she got the Grammy gig, excitedly broke the news to her mom over the phone, woke husband Swizz Beats to tell him, received a suitably underwhelming reaction from her two small children, and then took us along to a Grammy promo shoot where she perused a few questionable outfits behind the scenes. All while sporting a beaming smile and a knowing wink at the camera.

Further proof Keys—only the fifth woman to host the Grammys and the first to do so in 14 years following Queen Latifah in 2005—knows how to have a good time in the role arrived Wednesday when she appeared on “The Late Late Show with James Corden” and asked the former host for a few tips on how to navigate the big night. Rather than sit and chat, the pair performed a parody cover version of Gaga and Cooper’s ballad “Shallow,” which is nominated for song and record of the year.

Standing by an upright piano with Keys providing musical accompaniment, Corden sang of the importance of wearing “comfy shoes” and warned that after four hours “you’ll find yourself drinking cheap booze / Stealing from gift bags, a candle for free.” Other advice from Corden included, “Try not to be scared,” and “act like you’ve been there,” to which Keys belted back: “You know I’ve won 15 times!”

Fallon, Hemsworth, Mistake Each Other for Other Celebs 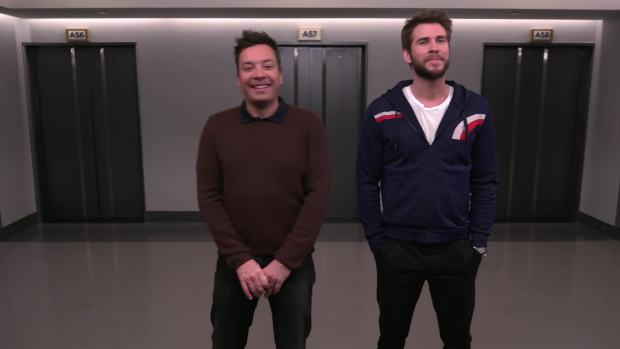 All of which signifies that the safest gamble concerning Sunday’s ceremony would be to bet on Keys. Not to win an actual award, she isn’t nominated, but to deliver an entertaining show buoyed by humor and respect for the craft being honored. Such expertise she has already shown in abundance.

The 2019 Grammy Awards are set to air live Feb. 10 on CBS from the Staples Center in Los Angeles. Top nominees are Kendrick Lamar and Drake with eight and seven nominations respectively.